Confirm business hours in advance.
Home / News / My Experience On The Parentology Show

My Experience On The Parentology Show 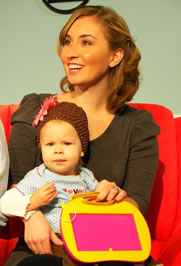 I was recently a guest on the new Parentology Show with host Paula Gretzinger, who is from Clifton Park, NY. It was a truly rewarding and fun experience that will also serve to help other parents who see the segment.

A couple of months back, I got a surprise message from one of my former professors at Russell Sage College -- Paula Gretzinger. She mentioned that a new show she was hosting, Parentology, was seeking guests, and she wanted me to appear on the Parentology Show!

Of course I eagerly accepted (who doesn't want 15 minutes of fame?), and we mapped out a date for the filming at Saratoga High School. It gave me an opportunity to meet a couple of other parents who were as real and enthusiastic about parenting as I am. Paula had grouped us together in a segment for new parents where we each got a chance to share our insights on what it's like being a first-time parent... our struggles, our tips, the changes, etc. Video below.

On the morning of the filming, I was off to Saratoga Springs High School with my 16-month-old daughter and was running a little late (as a parent, I am always running a little late). I arrived at the school about 15 minutes late, checked in at the front desk and was given directions to the studio, which was a long walk. Fortunately, I wasn't wearing heels, but unfortunately, I had the unrelieved weight of my 1 year old asleep in my arms with my purse (which I'm convinced weighs more than she does) slung over my shoulder. Did I mention it was a long walk?

Arms burning and out of breath, I reached the other end of the school where the Parentology Show studio was. I was ready to apologize for my tardiness, but as it turned out, nobody was waiting on me. They were working out a few kinks and technical difficulties before we could tape. Phew. Apparently the Saratoga High School students also use the equipment, so not everything was where it was expected to be, which was the cause for the brief hold-up.... which turned out to be not so brief after all.

The time flew by as we were waiting and chatting away with other guests, but I was glad I had brought snacks because the typically "not more than 1/2 hour" taping session turned into over two hours of waiting and taping. But it was fun, so I wasn't complaining.

When we were finally called onto the set, I felt excited. All the topics and questions I had been preparing to talk about were finally going to be asked of me. Paula was just as I remembered her from my college days -- smiling, beautiful, vibrant, not at all serious. We joked around with Paula and the Parentology staff as they hooked up our mics and positioned us on the set. 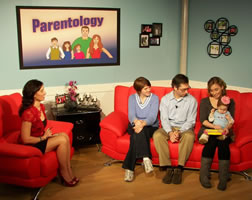 I could see a TV on the wall showing us how we looked on the set, and I was glad I had applied a little extra makeup that morning because if I had worn my usual amount, the lights would have washed me out.

As we were preparing to tape, Paula let us in on some of the questions she was going to ask us so we felt a little more prepared (though some she kept as a surprise because she wanted our answers to be spontaneous and authentic). We spent about 5 minutes going over some practice questions and answers, and I felt completely comfortable on the set. "I'm a natural," I thought.

But then someone in the back said they were ready to film in "3, 2, 1...." My gut sank, the nerves set in, my legs started shaking, the lights got hotter. What was happening to me? Why was there such a difference between the practice and the real thing? It was very new and very strange, but exciting at the same time.

I made a decision to ignore my nerves and try to supress them. I talked with Paula and the other two Parentology guests like we were in her living room. We played off of each other, shared our experiences, gave our advice, joked, laughed and had a great time.

I found myself a little sad when it was a wrap because I wanted it to continue. I had so much to say and so much to offer, but there just wasn't the time for it. I'm sure the other parents felt the same way. Maybe someday the Parentology Show will be more than just 1/2 hour long with 7-minute snippets of parents giving their advice. But I digress...

After our segment together, they wanted us each to do a quick introduction of ourselves as parents before we left. They asked us to say a few words, giving us a basic idea of what they wanted. I blurted out something as a test that they said was perfect. Too bad the camera wasn't rolling when I said it.

As soon as they started recording, I was fumbling over my words, forgetting what I wanted to say and kept calling Grace "my 16-year-old daughter" instead of 16 months. We did take after take after take while I tried to get it right. This 10-second introduction was probably the hardest thing for me about the whole process. It's funny how things change when you know you are being filmed for thousands to see! Finally I got it right and was free to go.

Before I left the studio, I asked Paula when the segment would air, and she told me 2 weeks from the taping date during the Parentology Show's usual time slot -- Sunday morning at 8:30am. I told all my friends and family to tune in and witness my 15 minutes of fame. They all thought I was so calm and composed... a natural. I sure fooled them!

The Parentology Show airs on Channel 10 at 10 am every Sunday morning. It's a great show to watch or set your DVR to record. Paula is always looking for guests to be on the show, from parents to grandparents, pediatricians and other experts. If you want to be a guest on the show, or inquire on their Facebook Page.

Watch my Parentology segment below: