Identify Landmarks Around the Capital Region and Win!

Clifton Park, NY- How well do you know your Capital Region landmarks? Well enough to win a diamond worth $1 grand? 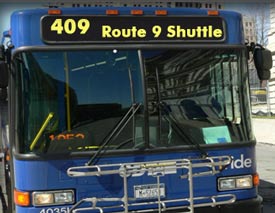 August 23, 2010 kicked off the Traveling Diamond Hunt. You have the chance to win a diamond worth $1000! Star 101.3, CDTA and Hannoush Jewelers want to give you a diamond. Don't worry you can qualify right up to September 10!

Each weekday, check out the Star Morning Crew's Facebook page. There will be a picture posted of the hosts, either Ric or Brianne, holding the diamond in front of a mystery Capital Region location. Then tune in and listen for your cue to call. The first person to correctly identify the landmark qualifies for a chance to win a diamond!

On September 10th, all qualifiers will ride the CDTA "Diamond Hunt run," which will travel Route 9 to Hannoush Jewelers in Clifton Park, and be part of a live broadcast. Those who qualify are asked to bring 1 guest, who will also have a chance in the grand prize drawing.

The CDTA, Star 101.3 FM, and Hannoush Jewelers will also offer a wild card opportunity for one lucky contestant to get in on the drawing by just showing up at Hannoush Jewelers in Clifton Park on September 10th from 6:00-6:30PM.

For more information on the bus route call the CDTA Customer Information Center at (518) 482-8822.

For more information on the Traveling Diamond Hunt visit CDTA.org or star1013.com.