Memorial Day Weekend is coming up in the Capital Region! Take a look at a number of parades, ceremonies, and services happening throughout the weekend where you can honor those who have served. Then, check out festivals and live music going on. 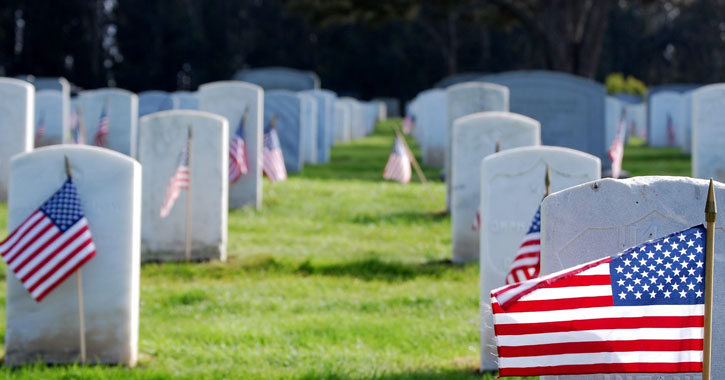 The Ballston Spa Memorial Day Parade is happening on Saturday morning. The event will begin with a wreath ceremony and end with speakers at memorials in Memorial Park next to the Ballston Spa Public Library.

The Albany Memorial Day Parade is starting on Central Avenue between Partridge Street and the NYS Education Building.

The Watervliet Memorial Day Parade will be starting at the Watervliet High School and heading down 19th street.

The Rensselaer Memorial Day Parade is starting in front of Beverwyck Cemetery and will be making its way down Washington Avenue. There will be opening ceremonies across from the cemetery prior to the parade kicking off.

There will be Memorial Day ceremonies taking place at Vale Cemetery and Park in Schenectady, complete with Taps, a flag raising, and the National Anthem.

This Memorial Day event happening at Saratoga National Historic Park in Stillwater will focus on the sacrifices made by New York officers and soldiers who lost their lives at the Battle of Saratoga in 1777.

Happening at the Saratoga Casino Hotel, the Saratoga Lions Club is putting on a Memorial Day-themed event with a duathlon and a separate 5K/Walk. Proceeds go towards the club and their ongoing effort to assist those with visual and hearing impairments.

The GottaGetGon Folk Festival is taking place at the Saratoga County Fairgrounds in Ballston Spa. This is a family-friendly event featuring established musicians and emerging artists, and there will be a Saturday Night Barn Dance.

The annual Hattie’s Crawfish Festival is happening once again at Hattie’s Restaurant in Saratoga. Enjoy fresh crawfish by the pound, along with fried chicken, gumbo, and shrimp. Entertainment will be provided by Garland Nelson and The Saratoga Ragtime.

The Front Bottoms, an indie rock band from New Jersey, are performing at Upstate Concert Hall on Friday. Tickets are $22 in advance or $26 the day of the show.

Hammerfall is performing at Upstate Concert Hall on Saturday. They’re a Swedish heavy metal band, and they’ll be playing along with Flotsam and Jetsam and Within the Fire, both of which are also metal bands. Tickets are $29.50 in advance or $35 the day of the show.

Discover fun things to do in the Clifton Park area >>

See more events going on at the full events calendar >>