It’s shaping up to be another festive weekend in the Capital Region! There are Santa-themed events happening in Albany and Saratoga, and holiday performances at Proctors and other venues. What’s your favorite annual holiday event in the area? 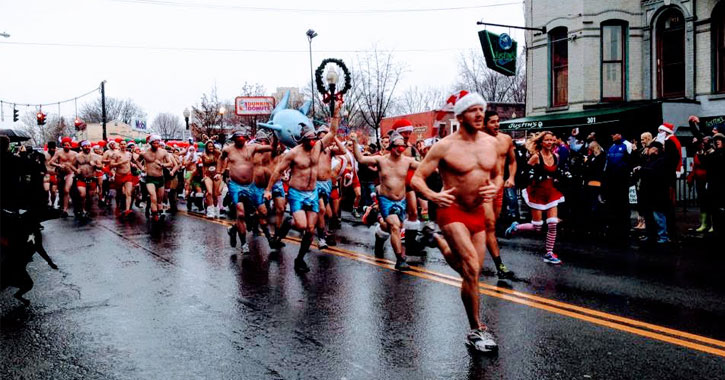 The annual Santa Speedo Sprint is taking place on Lark Street and registration is still open for $25. The event raises money for the Albany Damien Center and the HIV/AIDS program at Albany Medical Center. This is a very popular event where runners wear everything from speedos to bikinis to holiday-themed costumes. Not interested in running? You can still come down and watch the fun and make a donation!

SantaCon in Saratoga returns this weekend! This is a massive pub crawl throughout the Spa City where participants get dressed up in their most festive Santa gear. The event will begin at the Putnam Den, and then the group will make their way to The Ice House, Clancy’s Tavern, Gaffney’s, and more fun hot spots.

Have your kids written to Santa yet? The Town of Clifton Park is once again forwarding letters to the North Pole. Include a self-addressed stamped envelope to get a reply from Santa himself. But, time is running out – you must drop off the letters by Monday.

If your kids are Frozen fans you won’t want to miss out on Disney On Ice: Frozen, happening at the Times Union Center. You’ll get to see all your favorite Frozen characters, along with special appearances by other Disney stars from Toy Story, Finding Dory, and more.

CBS 6 Melodies of Christmas at Proctors

You can see the Empire State Youth Orchestra and Youth Chorale perform at Proctors this weekend as part of CBS 6 Melodies of Christmas show. Net proceeds will benefit the Melodies Center for Childhood Cancer and Blood Disorders at the Bernard & Millie Duker Children’s Hospital at Albany Medical Center. Tickets are $25; there are a limited amount of $15 tickets for the Thursday and Friday shows.

The Best Christmas Pageant Ever at The Cohoes Music Hall

You can see a funny and heartwarming Christmas story played out at The Cohoes Music Hall with The Best Christmas Pageant Ever, based on the 1971 book by Barbara Robinson. Tickets are $25 for adults, and $15 for kids 12 and under.

A Christmas Carol at HMT

Come out to see the classic A Christmas Carol played out by Home Made Theater at The Spa Little Theater in Saratoga. Tickets are $18 for adults, and $12 for kids 12 and under.

This event is happening on Lark Street in conjunction with the Santa Speedo Sprint. You can try $1 samples of chili and chowder from area restaurants and vote on your favorite.

Find even more events happening at the events calendar >>