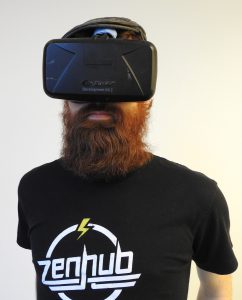 Donn DeLane, who operates the Tru Escape mystery and escape rooms in ViaPort Rotterdam and Aviation malls, is opening the new gaming lounge with Andreas Duerr, and they are really excited about the long-term growth potential of VR gaming.

“It’s almost limitless what you can do,” DeLane told the Daily Gazette. “I can’t wait to see what they do in the next five years.”

Toxic VR uses HTC Vive goggles and MSI Gaming computers (with super fast graphics cards) to eliminate many of the problems that have plagued VR gaming. “A lot of the problems people had with VR, what happens is, there’s a little bit of a lag to it – it gives people motion sickness,” DeLane told the Daily Gazette. But that won’t be a problem for gamers at Toxic VR!

Some of the other Toxic VR gaming options include:

Prices are $15 for 15 minutes, $25 for 30 minutes, and $39 for 60 minutes. Monthly memberships come with special perks like lower-cost time blocks and reduced rates on additional time.