The Adirondack Thunder’s Opening Day is next month, and during this off-season, the hockey team has continued to sign players and bolster its 2016-17 roster. Recently, it was announced Clifton Park’s very own Peter MacArthur has re-signed with the Adirondack Thunder to captain the team for a second season! 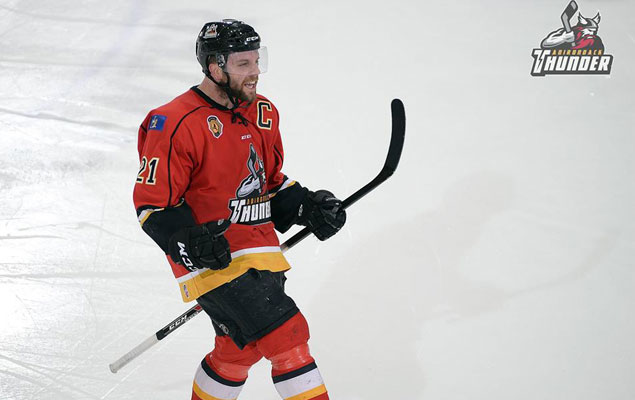 Photo provided by the Adirondack Thunder

From 1999-2001, MacArthur played hockey at Shenendehowa High School in the Capital District High School Hockey League. MacArthur then played four years at Boston University, and he was named captain during his senior season in 2007-08.

The Clifton Park native’s hockey career eventually led him to play internationally in Europe. He spent three seasons playing for teams in both Germany and Austria. During this period, he also helped lead Team USA to gold at the 2013 Deutschland Cup, notably scoring the final game-winning goal against Germany.

The veteran forward brought a lot of experience to the Thunder, and on March 26, 2016, he was named the second captain in the team’s history. Additionally, he was recognized as the Sherwood Hockey ECHL Player of the Week for March 14-20.

Today, MacArthur, 31, is prepared to lead the Adirondack Thunder once again now that he has signed a standard player contract. Two more recent signings include:

Get ready for another great season of Adirondack Thunder hockey when MacArthur and the rest of the team play the first 2016-17 home game against the Manchester Monarchs on October 22 at the Civic Center!