Whether you consider yourself a Trekkie or not, it’s hard to deny that the original Star Trek has become a worldwide cultural phenomenon. Although the series is celebrating its 50th anniversary this year, the voyage of the starship Enterprise continues on. In preparation for the premiere of Star Trek Beyond, Comic-Con, and other events later this year, Shmaltz Brewing Company has created two 50th Anniversary Collector’s Edition Star Trek-themed beers! 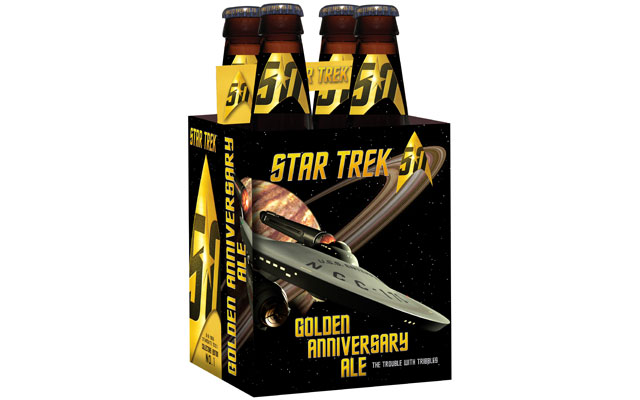 This beer will be released first at the premiere of Star Trek Beyond at Embarcadero Marine Park in San Diego on July 20, 2016. It will be available at select retailers in the San Diego area during Comic-Con 2016 (July 21-24). Next month, the beer will return and be available at the Star Trek Las Vegas convention at the Rio Hotel & Casino from August 3-7.

For all you non-Trekkies, this beer was inspired by Star Trek episode #44, “The Trouble with Tribbles.” In the episode,  the starship Enterprise crew is summoned to guard shipments of quadrotriticale, a grain hybrid. Although that doesn’t exist in the real world, Shmaltz was able to brew this beer using regular triticale.

The Trouble With Tribbles beer is made of 5 malts and 5 hops, with 5% ABV. In a press release on Brewbound, Shmaltz Lead Brewer Drew Schmidt described it and said, “Light Carastan malt gives some residual sweetness in the form of very light toffee.”

The second of Shmaltz’s anniversary beers will debut at a northeastern convention called Star Trek: Mission New York, which will take place from September 2-4, 2016 at the Javits Center in New York City.

Voyage To The Northeast Quadrant is also made of 5 malts and 5 hops, with 5% ABV. This particular recipe was created by Shmaltz’s 2nd Shift Supervising Brewer Ivan Dedek. The beer was described in the press release as possessing, “a crisp, clean malt character showcased by the use of light Munich malts and brewer’s maze.”

If you can’t attend one of these events but still want to try out these Star Trek-themed beers, there will be a special release in Shmaltz’s Tasting Room on July 20.

Shmaltz Brewing Company, established by founder and owner Jeremy Cowan in 1996, opened up its production brewery in Clifton Park in 2013. The company now offers a variety of  year round and seasonal favorites.

Would you be interested in trying one of these Star Trek beers?