The Clifton Park-Halfmoon Library is celebrating their 7th anniversary on Moe Road and are asking their patrons to help them mark the event by writing a poem.

The 7-Word Poetry Contest is a creative and original idea, and like the title implies, the poems only need to be 7 words long! 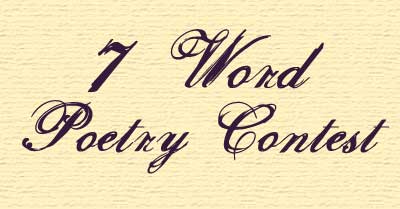 All potential poets have to do is write what they like about the library. An example on the library’s website reads “Didn’t know what I wanted, found it!” It is as easy as that, and by including your contact information on the back of your poem you will automatically enter to win a prize! Entries must be in by December 15th. One child and one adult will win the prizes, announced on December 20, 2013.

Melinda Taormina, a reference librarian at Clifton Park-Halfmoon Public Library, is the creator of the contest. Melinda says she has always enjoyed poetry and in college she was the literary editor. After working at a Children’s Library, she became experienced with creating poetry programs that were kid-friendly, just like the contest this year.

Melinda says, “Poetry can scare people, and 7 words is not that intimidating.”

What are the prizes that will be awarded? Well, Melinda is not totally sure yet, but she has some great ideas. The library is considering giving gift cards to the winners. For a child, Melinda said they are considering a gift card to 16 Handles, a local frozen yogurt shop, and for an adult, the gift card idea is Panera.

Don’t worry if you are new to the world of poetry; this contest is not based on talent but simply participation. Everyone is auto entered by including their name and contact information on their poetry entries, and the drawing will be random.

For the 7 year anniversary, Melinda says there will be cake! The library also has candy coins in milk and dark chocolate that they give to patrons every year. (Have you ever heard of a library more sweet?) As for other events or contests, updates will be coming soon and will be featured on Clifton Park’s event calendar.

So what are you waiting for? Pick your seven words and enter this pressure-free poetry contest today! Entries must be in by December 15th.

Thanks in advance, now here’s your chance!
(That was my entry…7 words isn’t too bad)

Want to keep apprised of other happenings in Clifton Park? Bookmark CliftonPark.com to stay in the know!