On Friday, April 20, Candlelight Red (along with The Lost Sons and Frank Palangi) will open for Trapt at Northern Lights in Clifton Park.

Candlelight Red is a rock band from central Pennsylvania that has shared the stage with bands like Buckcherry, Avenged Sevenfold, Disturbed, Tantric and KISS. The band has shows lined up for the whole summer, including a Nationwide tour with Saving Abel, and several dates booked with Lacuna Coil and Crossfade. 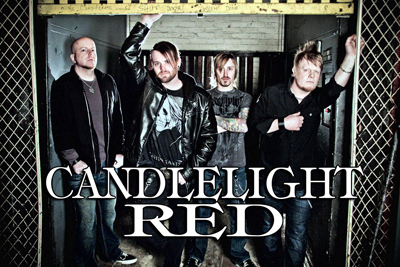 I spoke with Jeremy Edge (lead guitar & vocalist) about the upcoming show and he told me how the band got its big break..
Candlelight Red is made up of four members: Jeremy Edge on guitar and vocals, Jamie Morral on bass and vocals, Brian Dugan on the drums, and Ryan Hoke, lead vocalist. The band is inspired by the works of Rage Against The Machine, Korn, Motley Crüe, and Taproot to name a few.
In 2012, before CLR had signed a record deal, they won a contest with Guitar Center and were offered the opportunity to open for KISS in Pittsburgh. KISS handpicked the band from over ten thousand entries after watching an onstage competition between the finalists.

“Once upon a time, someone gave KISS a chance. We have always believed in giving back. From giving our fans the Hottest Show on Earth to giving new talent a shot. Congratulations to Candlelight Red. Well deserved.” – KISS bassist Gene Simmons

This was one of the big break through moments for Candlelight Red, being on the stage with rock legends like KISS. Shortly after the performance, the band signed a record deal with Indie label Imagen Records out of Washington D.C. and has recently released a full-length album with Grammy nominated producer David Ivory.

CLR has a nationwide tour coming up this summer with Saving Abel that will take them from coast to coast through July.
Head to Northern Lights next Friday (4/20) for the show, it should be a good time. If you’d like an idea of the type of music that Candlelight Red plays, listen to the song below: