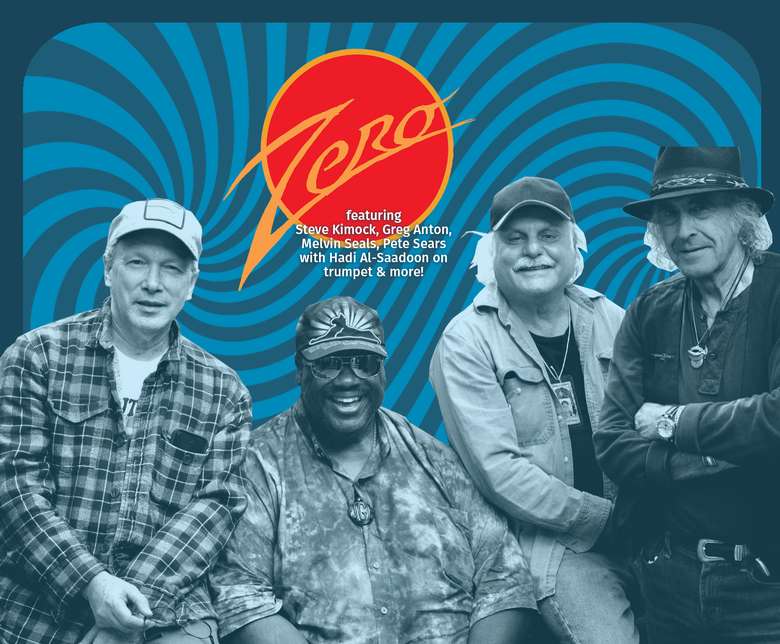 Please note, this show was originally scheduled for May 17, 2020.

Thirty-five years ago, having met when Steve Kimock auditioned for former Grateful Dead members Keith and Donna Jean Godchaux’s Heart of Gold Band (which already had Greg Anton as its drummer), Greg and Steve recorded an album, Greg on drums and piano, Steve on guitars and bass, which would be released decades later as Absolute Zero. Then they started a band to play the music. Having gone through many, many names, Greg asked Steve how many were left on the list to consider: “Zero” was the answer, and Zero became the quintessential jazz/rock fusion band, and a pioneer of the “jam” band scene.

They went years without vocals, creating such instrumental-only gems as Here Goes Nothin (1987), Nothin’ Goes Here (1990) (albums so good that Mobile Fidelity Sound Lab re-released them), and the live Go Hear Nothin’ (1991).   Along the way they played with some of the Bay Area’s greatest talent: John Cipollina, John Kahn, Banana, Martin Fierro, Hadi Al Saadoon, Bobby Vega, Nicky Hopkins, John Farey, and Steve Wolf. A casual conversation with Grateful Dead lyricist Robert Hunter in the early ‘90s sent the band in a new direction, and they added vocalist Judge Murphy and produced the classic Chance in a Million.

As bands will, Zero came and went – but always returned. After their incendiary set at the 1999 30th anniversary Oregon Country Fair, the Fair manager said, “You guys want to be on the 50th anniversary bill?” “Sure,” and they shook hands…and 20 years later, in July 2019, Zero (now with Pete Sears (Jefferson Starship, Hot Tuna, Moonalice) on bass, and Melvin Seals (JGB, Oteil & Friends) on keys) returned to the Country Fair stage. “Both Pete and Melvin,” said Anton, “used the word magic to describe it. We worked, as Zero does. One thing Steve and I have is a work ethic. We played for many hours before each of the two shows‚ because the songs needed to be honored. The songs have developed so many moves over the years, and we were in touch with them.”