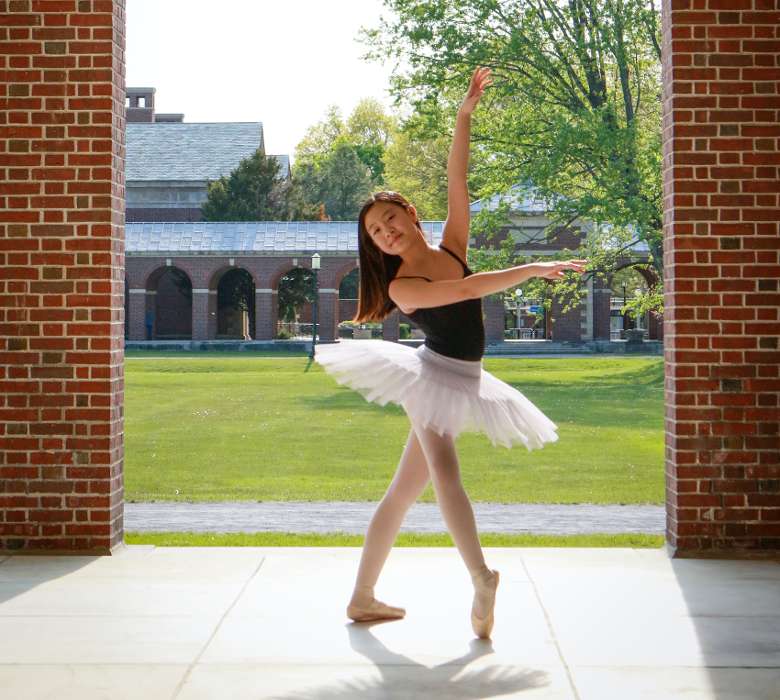 4 classes per day taught by a world-renowned guest and SSYB faculty. Ballet and pointe classes every morning, plus a variety of disciplines in the afternoon Afro- Fusion, Modern, Contemporary, Jazz, Pilates, Yoga, Gyrokinesis, Acting, and injury prevention seminars with Sports PT.

Returning guest faculty Vanessa Smith teaching ballet
Native to Southern NJ, Vanessa attended the Conservatory of Dance at Purchase College SUNY, where she earned her Bachelors of Fine Arts in dance performance with a concentration in ballet, studying with some of ballet’s finest masters including Ted Kivitt, Richard Cook, Rosanna Serivalli and Betty Jane Sills (a founding member of the Balanchine Trust). There, Miss Smith had the opportunity to perform the role of Waltz Girl in Balanchine’s iconic Serenade. Under the mentorship of the late and great Kazuko Hirabayashi, she also had the pleasure of working with many of today’s established choreographers and company directors including Megan Williams, Jonathan Riedel, and Jacqueline Buglisi. Miss Smith went on to perform in the International Dance Festival of Burgos, Spain where she then joined Ballet Contemporanio for a national touring season. Upon return to the states, Miss Smith began to tour nationally with Nicholas Andre Dance NYC, and Ballet for Young Audiences; with which she was involved in DRA, outreach and education in the children's dance community across the country, as well as making guest appearances as a principal dancer in many regional ballet productions. Vanessa was also a founding member, dancer and assistant director with Jessicadanser/dansfolk, NYC where she did community outreach with the Bronx Academy for Arts and Dance (BAAD). Currently, she is the Director of Ballet at Next Stage Dance and Drama Academy and faculty at Williamstown Ballet Theatre.

Hettie Barnhill teaching Afro-Fusion
A high-energy rhythm base dance workshop that infuses African, Modern, and Hip-Hop techniques with full-body cardio, stretches, and across-the-floor combinations. This class strengthens your core and increases flexibility and endurance. Students are challenged with more complicated material, maintaining dynamic alignment while standing and in motion and greater demands are placed on speed of learning, musicality, and retention of choreography.
Hettie Barnhill Visiting Professor in Dance at Skidmore College- is a Filmmaker, Director, Choreographer, and the founder of ‘Create A Space NOW’ an interactive social platform that uses performing arts and multimedia to further discussion around #blacklivesmatter and the recent events and race relations in America. Her film, A Love Letter to Brian, Lesley, and Michelle has been selected and awarded in festivals currently showing nationally and internationally. Hettie was nominated for New York Innovative Theater Award for Outstanding Choreography and has performed nationally, internationally on Broadway in the production's “Spider-Man Turn Off The Dark”, Tony Award-winning “FELA!" (original cast), and the Tony award-nominated “Leap Of Faith” (original cast).

Week 2:
Returning guest instructor Jessica Batten teaching ballet and contemporary
Jessica Batten trained as a student with New Jersey Dance Theatre Ensemble under Nancy Turano, and graduated cum Laude from SUNY Purchase in 2005- with a BFA in Dance. Ms. Batten has danced professionally with: NJDTE, Cedar Lake II, Connecticut Ballet, Bradley Shelver Contemporary Dance Theater, Ballet Hispanico of New York, Nimbus Dance Works, Aspen Santa Fe Ballet, and with The Metropolitan Opera Ballet; among many other companies and choreographers. Ms. Batten was invited to perform in Cali, Colombia in the Fifth Annual International Dance Festival 2011, representing the USA with Earl Mosely's Diversity of Dance, and has traveled the world performing and teaching. She has performed with the Kirov Ballet at The Metropolitan Opera House in NYC, and has been an invited Artist for the Cape Dance Festival. In 2008, she appeared on the AMICI Television Show in Rome, Italy, dancing as a Guest Profesionista on the full series.
Ms. Batten was the Ballet Mistress & Rehearsal Director for NJ Dance Theatre Ensemble for several years, where she staged multiple ballets for the pre-professional company. When she is in NYC, she serves as part time Rehearsal Director for the professional contemporary dance company, Nimbus Dance, along with being on faculty at The Joffrey Ballet School every summer.
Today Ms. Batten resides in Putney, Vermont where she is the Director of Dance at The Putney School- a progressive boarding high school in southern Vermont.

Week 3:
Returning guest faculty Anny DeGange Holgate teaching acting for dancers
Anny Holgate began her career as a dancer with The Martha Graham Dance Company upon graduating from Juilliard. She was an original cast member of six Broadway shows including Evita and Les Miserables. Regionally she was seen as Maria in West Side Story, Lily in Carnival, Marsinah in Kismet and other soprano roles. She sang with the New York City Opera, Cleveland Opera (Hansel and Gretel) and in Italy did concert versions of operas, including Gilda in Rigoletto and Susanna in Marriage of Figaro. She appeared opposite international ballerina, Carla Fracci, in More About Orfeo, at the Festivale Maggio Musicale. At the New York State Theater Institute, she did leading roles in 1776, Reunion, 12 Angry Jurors, Anastasia, The Diary of Anne Frank and Romeo and Juliet, as well as choreographing and directing. She is a founding member of itheater Saratoga, ,where she has appeared in many diverse roles, including Maria Callas in Master Class. She also teaches, choreographs and stage manages for the company and appears in regional productions around the state.

Week 4: Tina Fores Hitt teaching Contemporary & Modern
Tina Forés-Hitt was brought up between the USA and Europe. She began her dance training at the Conservatorio Profesional de Danza en Valencia, Spain and after graduating she became a member of the Diverse Space Dance Theatre in Austin, Texas. She started her BA in contemporary dance at ArtEZ Academy of the Arts in Holland and completed her studies at SEAD in Austria. The Spanish-American dancer then became a member of the BODHI PROJECT 2017-18, which toured worldwide performing pieces by a variety of choreographers.

Week 5: Michael Jackson, Jr teaching Modern
Michael Jackson, Jr. (New Orleans, LA) began his dance training at age 14 at the Duke Ellington School of the Arts in Washington, D.C., under the direction of Charles Augins. He became a member of Dance Theatre of Harlem Dancing through Barriers Ensemble in 2005. In 2006, he joined Dallas Black Dance Theatre and in 2008 joined PHILADANCO!, where he also worked as Artistic Director of D3. Mr. Jackson joined the Alvin Ailey Dance Company in 2011 and rejoined in 2015.