There are some really amazing events slated for this weekend in the Capital Region! Foodies can get excited for the Saratoga Wine & Food Festival and the Cheese Tour With Wine & Beer, fitness enthusiasts can check out the Insane Inflatable 5K, and there’s more fun going on for every member of the family. 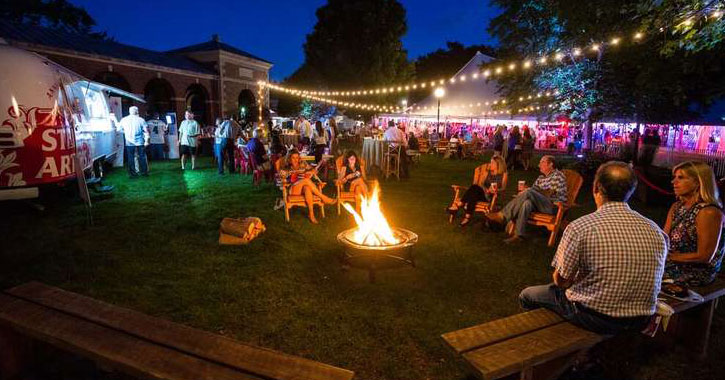 The epic Saratoga Wine & Food Festival is taking place all weekend long with a full schedule of events including a Grand Tasting, a grill competition, a brunch, and more.

For free jazz music and activities going on all day, make sure you check out the Albany Riverfront Jazz Festival. There will also be food, vendors, and more.

The annual Albany Labor Day Parade is happening on Friday evening at the Corning Preserve. Soul Sky will be performing, and there will also be fireworks at the end of the event.

The Waterford Tugboat Roundup is happening all weekend. You can catch a tugboat parade along with vendors, food, live music, and kids activities.

The Cheese Tour With Wine and Beer

The Most Unique 5K

The annual Insane Inflatable 5K returns to Ellms Family Farm in Ballston Spa! This super popular 5K and obstacle course fills up quickly, so be sure to register and reserve your spot as soon as possible.

If you haven’t checked out an improv show yet at the hilarious Mopco Improv Theatre, this weekend they’re hosting a Comedy Roast Battle between Albany and Hudson Valley. There is a huge lineup of comedians who will be duking it out. Tickets start at $6.

Enjoy face painting, balloon art, magic shows, and much more at Saratoga Grandparents Day, happening at the Saratoga Springs City Center. This is a great opportunity for everyone in the family to have fun together, and there’s suggested donation of just $5.

Head to Shenantaha Creek Park in Malta on Saturday for music, kids activities, food, community organizations, and more, including fire tricks and demonstrations.

Coco in the Park

The 2017 animated film Coco, about a young musician seeking to unlock his family’s history, will be shown in Wiswall Park in Ballston Spa on Friday evening.

Movies Under the Stars: Wonder Woman

Wonder Woman will be shown in Washington Park, and there will be live music and family activities before the screening.

Cultural Programs at the Library

Learn the historic art of Chinese paper cutting at the Clifton Park-Halfmoon Library.

After getting educated on a Chinese art form at the library on Saturday, they’ll be taking a look at Japanese culture with a presentation of traditional drumming on Sunday.

All makes of cars, trucks, and jeeps are welcome at this car show happening at Curtis Lumber in Ballston Spa, and over 38 trophies will be awarded. There will also be music, food, beverages, raffles, and door prizes. Spectators are free.

Attention actors! The CM School of Fine Arts right in Clifton Park is hosting auditions for Nightmare Before Christmas: The Musical, which will be performed in November.