See fireworks, watch a water ski show, attend a festival, check out a rodeo, hear great live music, and more – it’s all happening around the Capital Region this weekend! 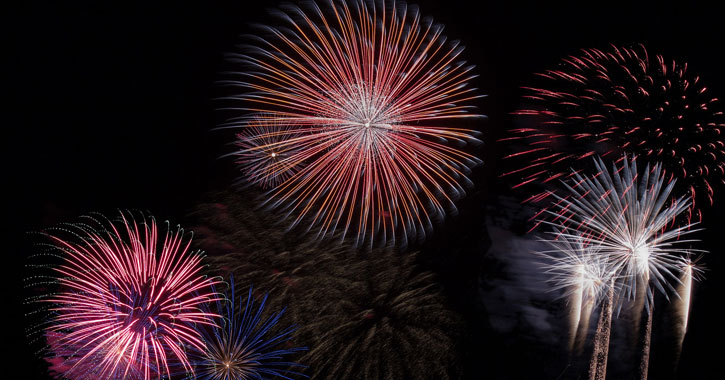 Here’s where you can see fireworks this weekend, in conjunction with awesome events:

Enjoy a water ski show from the US Water Ski Show Team at Jumpin’ Jacks in Scotia before fireworks later in the evening.

The ValleyCats are facing off against the Renegades on Star Wars Night. Guests are encouraged to wear Star Wars gear, and you can look forward to fireworks following the game.

Check out the Red, White and Brew Festival happening at Proctors in Schenectady! There will be beer tastings from local and craft breweries, food vendors, and live music. Pre-sale tickets are $35 and include 15 beer samples. Designated driver tickets are $15.

Head to the Rodeo

The Double M Rodeo in Ballston Spa is opening for the season this Friday! Opening day is kicking off with some line dancing under the pavilion before the official rodeo begins. Admission is $15 at the gate for adults, and $5 for kids 5 to 12.

There are multiple chances to check out live music this weekend, from major shows at SPAC to completely free performances:

Performing Arts at the Common: 7 Bridges Road – A Tribute to the Eagles

Love The Eagles? Head to Clifton Common on Sunday for an awesome tribute performance to the beloved group.

Imagine Dragons will be at SPAC along with Grace Vanderwaal. Tickets start at $46.

Steely Dan and The Doobie Brothers will be performing at SPAC. Tickets start at $30.

Rusticator will be performing at Freedom Park in Scotia as part of the free summer concert series. They’re described as having “Americana spirit.” This event coincides with the Jumpin’ Jacks Fireworks and Water Ski Show listed above.

You can see The Legendary Characters at Freedom Park on Sunday. This band focuses on music from the 20s to the 60s, spanning rock and roll, rockabilly, R&B, swing, jazz, and country.

Learn Something New at a History Event

Have you ever checked out the historic Grant Cottage in Wilton? This weekend might be a great chance – they’re hosting a special event centered around slavery and how slave trading affected the colonists of Dutch New York.

Stop by the Clifton Park-Halfmoon Public Library this weekend to check out the One Woman Art Exhibit from local artist Eva Marie. The exhibit includes 31 different works, some of which are Saratoga-inspired.

Explore hiking and biking trails in Clifton Park this weekend >>