What’s a brewery’s most important birthday? 21, of course!

Shmaltz Brewing, established in 1996, turns 21 in 2017 (I know, 1996 was 21 years ago – crazy!). The brewery is celebrating with a special release of their Funky Jewbelation® barrel aged sour. The series (2012-2017) has brought home some impressive honors over the years, including a Gold Medal at the World Beer Championships, Grand Champion in the Giant Beer category at the US Beer Tasting Championship, a silver medal at the prestigious World Beer Cup 2014, and consistent 94-98 ratings from RateBeer.com.

About the 2017 Funky Jewbelation® from Shmaltz Brewing 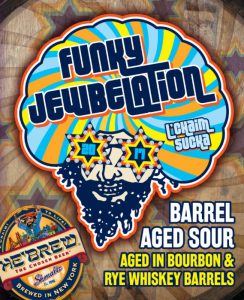 The 2017 Funky is a deep, rich, ruby in color and has a tart flavor that is full of dark fruit like raspberries, blueberries, fig, and complex malts that meld the fruit with notes of caramel, toffee, and rye. The Funky’s aroma is truly funky, bouncing between bittersweet chocolate, tart peach, apricot, and that special farmhouse funk particular to sours. The mouthfeel of this funky beer is a bit puckering, but pronounced hints of bourbon, charred wood, molasses, and light notes of bing cherry bring you to a finish that is almost wine-like in its texture and structure.

The blend is an expert mash-up of:

Shmaltz will be doing tastings during Saratoga Beer Week (Feb 21-26)! Join the team for tastings at the following events: