As the craft beer and spirits trend continues to surge, a brand new distilling company set up shop in Clifton Park this past week. 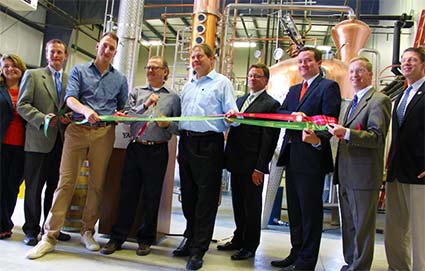 Yankee Distillers, which is housed at 5 Fairchild Square, across the street from Schmaltz Brewing Co., will produce whiskey, rum and vodka and operate a tasting room for guests.

Walter Kleemeier, Scott Luning and Matt Jager, who helped bring the first distillery to Albany after an 80 year hiatus, have all joined forces to create and manage Yankee Distillers.
According to the Albany Business Review, there are now more than 25 craft brewers in the Albany area and 15 of them have opened since 2011.
Jagger told the Albany Business Review, “We want more distilleries to open, it’s a rising tide floats all ships thing right now. We’re trying to increase the prominence of craft spirits as a big market segment. We’re up against the big guys, not each other.”
We can’t wait to give Yankee Distillers a try! What do you think about the increase in craft brewers’ and distillers’ presence in the Capital Region?
Source:
Albany Business Review